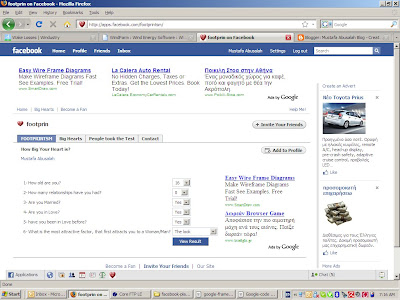 Google has recently loosened its AdSense Terms of Service so publishers can run other contextual targeted ads along with Google AdSense, but the change may be because Google wants to run their ads in publishing vehicles alongside other advertisements (like the ads running within Facebook).

Steve Rubel thinks that Google AdSense ads will soon be coming to the Facebook applications Google has been slowly rolling out, especially after the quote from Eric Schmidt in AdAge :

“How will those developers get paid for those services? We would like to have our ads in those applications.”

First you should have a face book application with hosting service.

Second you should have a google adsense account if you don't have one go to google and create one.

Create adsense ads that you want to embed in your FB application(s).

embed the previous page in another page that includes the below frameset to disable scroll bar:

Popular posts from this blog

December 25, 2011
Google Adsense is a web tool that allows publishers in the Google Network of content sites to automatically serve text, image, video, and rich media adverts that are targeted to site content and audience. These adverts are administered, sorted, and maintained by Google, and they can generate revenue on either a per-click or per-impression basis.  Google servers advertisers using google adwords platform, while adsense is the publishers platform. Google Adsense is the top Ad Publishers platform over the web ranking number one in web advertising industry. Adsense offers contextual advertisements that covers web sites, blogs, games, videos, mobile browsing etc. What made Google Adsense no. 1 is the reliability, stability, variety of services and large number of publishers including google it self. Also google has a fair platform that detects invalid clicks so google successfully protects its advertisers and also offers its best publishers top CPC. Two reasons are behind people think
12 comments
Read more

November 29, 2013
I have downloaded Bit Torrent software and when trying to download I got an error after few seconds saying: Error: Write to Disk Access Denied Solving this problem is so simple: Shut down BitTorrent program. Go to Start and in the small search box on top of windows start button start typing Bittorrent and the program will show, right click with the mouse on the icon and Run as Administrator. All ur problems are sorted out now and you can enjoy downloading... Good Luck.
12 comments
Read more

October 01, 2018
After installing Python on Windows 10. When trying to open IDLE, Python's IDE, you might get a  message saying that " IDLE's subprocess didn't make connection . Either IDLE can't start a subprocess or personal firewall software is blocking the connection ". To solve this issue just run IDLE as an Administrator, by right click on the IDLE icon and click Run as administrator. See Photo below:
1 comment
Read more